"Heads up, World Cup teams: The robots are coming" in Yahoo News

Heads up, World Cup teams: The robots are coming 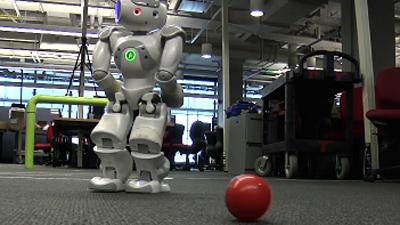 When robots first started playing soccer, it was a challenge for them just to see the ball. And to stay upright.

But the machines participating in this month's international RoboCup tournament are making passes and scoring points. Their ultimate goal? To beat the human World Cup champs within the next 35 years.

"It's hard to predict what will happen in 2050, but we are on the right path," said event co-founder Manuela Veloso, a computer science professor at Carnegie Mellon University in Pittsburgh.

A week after the World Cup title game in Rio de Janeiro, teams from 45 countries will face off at RoboCup about 1,200 miles away in the Brazilian coastal town of Joao Pessoa.

The "players," which range from life-size humanoids to wheeled objects the size of soccer balls, compete in size-based divisions on miniature indoor fields. The tournament runs from July 19-25.

While certainly fun to watch, organizers say the annual competition isn't just about creating kicking machines. It's about teaching the fully autonomous robots to make quick, smart decisions while working together in a changing environment.

Happy Holidays from the GRASP Lab!

Robots to the Rescue