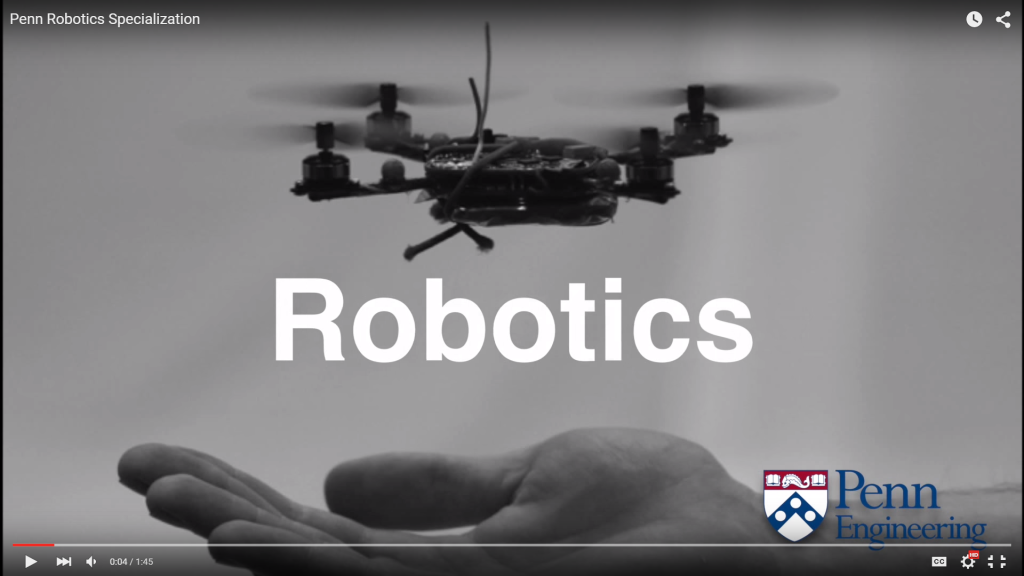 We are excited to announce Penn’s new Robotics Specialization!

Scheduled to launch on Coursera in January, the specialization is targeted toward advanced learners and professionals in STEM fields. While several universities offer online courses on robots and robotics, Penn’s specialization is unique in that it will be a more comprehensive and largely self-contained introduction to the field.

At the conclusion of the five course sequence, learners will apply what they’ve learned to a final capstone project, which will include a hands-on component and a simulation involving navigation, mobility, and manipulation tasks. In the future, course faculty hope to provide students with the ability to test code remotely on a real robot.

In recent years, robots have evolved from what used to resemble remote-controlled toys into complicated autonomous agents with sophisticated mapping technologies, coordination capabilities, and applications to a wide variety of areas, including military and agricultural. Very much at the forefront of these advancements are researchers at Penn robotics laboratory: GRASP.

Just as modern robots are becoming increasingly capable of exhibiting cooperative behavior, the field is itself evolving into an area of exciting collaboration. Indeed, one of the reasons the GRASP Lab has been able to make such dramatic contributions to robotics is its interdisciplinary nature: Dean of Engineering Vijay Kumar says that the mix of researchers from several departments—primarily ESE, CIS, and MEAM—is largely to credit for the lab’s success.

As robots continue to increase in sophistication, researchers face ever more complicated questions, many of which tend to cut across disciplines. One such question is how to organize thousands of pieces of local information into a more telling global picture of an environment. To answer such questions, GRASP researchers are partnering with colleagues in the Mathematics Department to find new applications for century-old ideas from algebraic topology.

Just as the electronics industry is characterized by a trend toward cramming more and more transistors onto an integrated circuit, the robotics industry is similarly distinguished by a tendency to go smaller. Taking advantage of scaling effects, researchers at the GRASP Lab are building smaller robots with lower inertia and wattage, but greater maneuverability and resistance to collision. Smaller robots can also more naturally be assembled into clusters in order to more effectively delegate tasks and exhibit complicated swarming behavior. Dean Kumar summarizes this nicely:

“Our emphasis is on three S’s: size, speed and smarts. A small, fast flying robot that can find its way through a partially collapsed building or a nuclear plant during a meltdown has the power to save lives.”

Course faculty hope the specialization will help bridge the gap between the high demand for trained roboticists and the budget constraints of smaller companies in need of these roboticists.