Tech is set to drive ‘every aspect of society.’ What are Philadelphia’s universities doing to diversify their STEM talent pipelines? 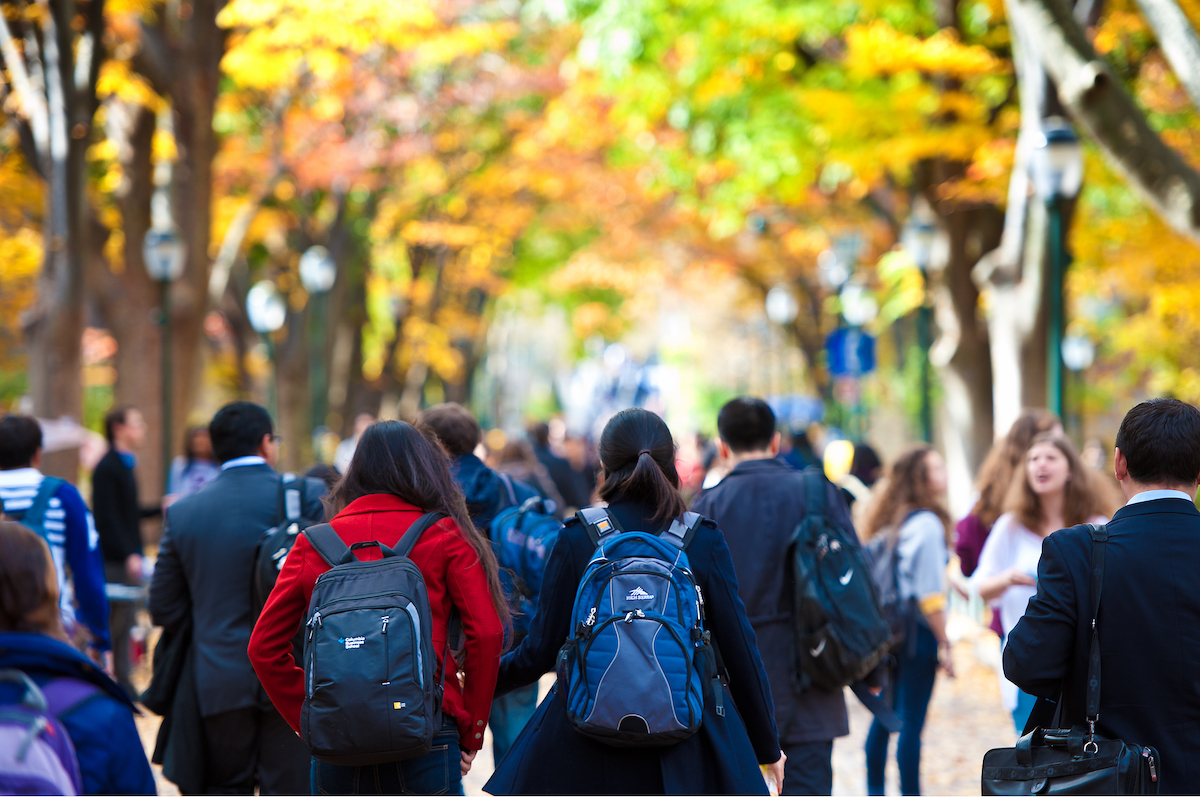 If you take a seat in any tech-focused higher education classroom, the industry’s diversity problem makes itself pretty clear.

While the number of undergraduate students of color at higher ed institutions across the US has risen sharply in the last few decades, from around 30% in 1996 to 45% in 2016, those pursuing technical degrees will see a wider split.

In 2018, only 7% of STEM bachelor’s degrees in the US went to Black students, and 12% went to Latinx students, a Pew Research study found. Meanwhile, white students and Asian students are overrepresented in STEM degree holders compared to their makeup of the US population. And while STEM degrees have seen some gender diversity in recent years, with women making up the lion’s share of healthcare degrees and positions (75%), technical majors and fields like engineering and computer science remain overwhelmingly male and white.

Here in Philadelphia, where most recent census data shows non-white residents make up more than 65% of the population, you can see this dynamic at play. There are efforts to make change, though.

How to meaningfully recruit and retain students of color

Aunshul Rege, a Temple University associate professor in cybersecurity and the director of the Cybersecurity in Application, Research and Education (CARE Lab), follows the general motto, “You can’t be what you can’t see.”

When she was completing her first degree in computer science in the early 2000s, she was one of two women in her cohort, and the only woman of color, she said. She believes seeing people who look like them in high-profile cybersecurity roles is one of the keys for students of color to succeed. And in higher education, that can often mean looking outside your own institution.

Rege works with Black Girls Hack and the Intertribal Education Foundation, and connects often with local colleges, high schools and graduate programs through CARE Lab events, like the social engineering event this summer. She stressed the importance of forming networks in and outside of higher education for the next phase of the workforce.

“I think we need to develop these intersections better, we’re training the next generation workforce,” Rege said. “If they see people like them at the other end, they can form their networks and support groups now, that makes it a smoother transition.”

Looking outside the higher ed institution is also critical for Kristin Austin, the director of inclusion, diversity, equity and access for Rewriting the Code, a community for women studying tech. The organization serves more than 15,000 women, and Austin works specifically with its Black, Latinx and neurodivergent populations.

The org doesn’t act as a resource to universities, but to students themselves, offering connections to recruiters, hiring companies, personal and professional development. One quick DEI strategy many organizations make is to recruit from HBCUs — which is a fine tactic, Austin said, but it “fails in reaching the real population of women in tech.” You’re accessing just a fraction of women of color in tech that way.

“Higher eds are always looking for something instead of a scholarship,” Austin said. But scholarships help students the most. “Do it and see what happens. Money doesn’t buy happiness, but it does buy food. And when students can pay their rent and eat, they are much happier and much more successful.”

Try this even if it means you’re bringing fewer people into the program, Austin said, because your retention rates and impact on those folks will be much, much higher.

Secondly, she said, create learning communities by connecting students with similar peers and making the curriculum more coherent, cohesive and relevant to their experience, Austin said. Duke University recently rolled out a living and learning version of this, grouping students around topics and interests like gender and sexuality, marine science and holistic wellness.

And third — make every student in a tech program take a foundational course in bias in technology, and in the tech industry overall. Non-white and non-male students face bias and exclusion from their peers, and many women especially drop out of their programs as a result.

As a faculty member who might be interested in learning how they can become more supportive to students of color, Austin says one of the easiest things to do is be open to outside resources and programs and share them with their students.

A case study at Drexel

Dean Yi Deng of Drexel University’s College of Computing & Informatics (CCI) told Technical.ly the school’s Black and Latinx population makes up about 11 to 12% of undergraduate enrollment. It’s on par with peer institutions, he said, but the school is in the early stages of a five-year racial equity overhaul.

Deng came to Philadelphia and the role at Drexel six years ago, looking for a bustling, connected metro city and university. He sees the tech industry not as a vertically growing one, but one that casts its growth horizontally, across far-reaching industries and deep into the core of how we operate everyday life now.

“Twenty years ago, tech was a tool. Working in the technology fields meant we were the tool makers. We built them, developed systems and infrastructure,” Deng said. “But today, technology is driving the fundamentals of every industry and every aspect of society.”

It’s why for the last five years, he’s been working with CCI on a diversity initiative intended to increase the number of women enrolled in and placed into tech careers from the college. The goal was to increase the number of female students by 50% over the following five years. It was a top-down approach for the whole college, Deng said, and involved building its own pipeline — new recruiting practices, changing messaging about the school, engaging local high schools and parents, training teachers, and working with industry partners. It also meant putting some money toward the goal by adding 100 scholarships for women students each year.

“We’re not done yet. There’s still a long way to go,” he said. “But we made a notable improvement.”

In the last year, the school has set its sights on diversifying the student population regarding race, using successful methods from the gender diversity initiative. The initiative has an overall goal to increase the number of students of color and women of color in its student population. The path to get there has four pillars of focus: diversity in the school’s leadership, more robust mentorship and professional development programs, diversity of its doctoral programs, and improved retention.

Getting buy-in from people at all levels of the school is probably the single most important factor for how much impact it can make, Deng said. The effort, if successful, will have ripple effects for diversifying Philadelphia’s talent pipeline, and retaining the professionals within in.

“We are arguably one of the largest tech talent providers in the region. How well we can do our job here will go a long way to diversify the tech workforce in our area,” Deng said. “This is something we can not solve alone — no one can. No matter how large or how resources you have, it needs to be a collective effort. We cannot change the suggestion by working hard one month or year. You have to have consistent drive.”

When tech developments ‘touch everyone,’ so does racial equity

For the last two years, University of Pennsylvania computer science professor CJ Taylor has been tasked with a concurrent role — associate dean for diversity, equity and inclusion within the computer and information sciences department.

He’s had a long tenure in higher education, but is new to DEI work, a priority put in place two years ago by Penn Engineering Dean Vijay Kumar.

“One does not need to look too deeply to see that, together with all of our society, engineers and technologists have failed to address our fields’ inadequacies in diversity and in providing or maintaining truly inclusive environments,” Kumar wrote in an announcement of the role.

They outlined three goals for the school: make the climate a place where anyone can do their best work, recruit more students of color to its graduate degree programs (since undergraduate recruitment is hosted universally through Penn admissions), and boost the school’s community outreach with external programs.

These goals exist in a few forms, mainly in building its talent pipeline. The school began working with Inveniam, a STEM equity and innovation program through the nonprofit Steppingstone Scholars that addresses systematic barriers that keep low-income and Black and brown students from entering industries that have historically been very white and very male. The school developed a virtual computer science AP course, and commits Penn undergraduates to a School District of Philadelphia partnership that develops computer science curricula. It also supports scholarships, and recruits for its bridge program, which targets people considering a master’s en route to a Ph.D.

Taylor underscores that it’s challenging work, and that there’s more to be done. But the university’s Philly home gives the institution the potential to be influential.

“It’s increasingly the case that engineering solutions, energy systems, the variety of electronic systems — they touch everyone,” Taylor said. “If that’s going to be the case, you want to build a future that’s inclusive, that everyone gets to participate in. Frankly, tech is a great deal of fun. It’s an amazing space to work in. We want to invite as many people as possible to participate, to make sure we get the best ideas, and the best systems out there.”

Tech will continue to spread into every facet of our lives, as all of the higher education experts we spoke to this month said. And though we’ve known for a long time that diverse teams are better for business, they told us the future of our tech products depends on the foundational work that can be done before and at the college level. Philadelphia is uniquely positioned to do so, with its diverse population and host of tech programs at these higher ed institutions, but it takes commitment.

Rege closed our conversation with an almost ominous note from the cybersecurity field: “Our adversaries are not homogenous, so we should not be.”

“If you want to build more supportive systems, it helps to bring in other contexts, language, backgrounds,” she said. “When you get people from these different groups around, we understand that community the best.”