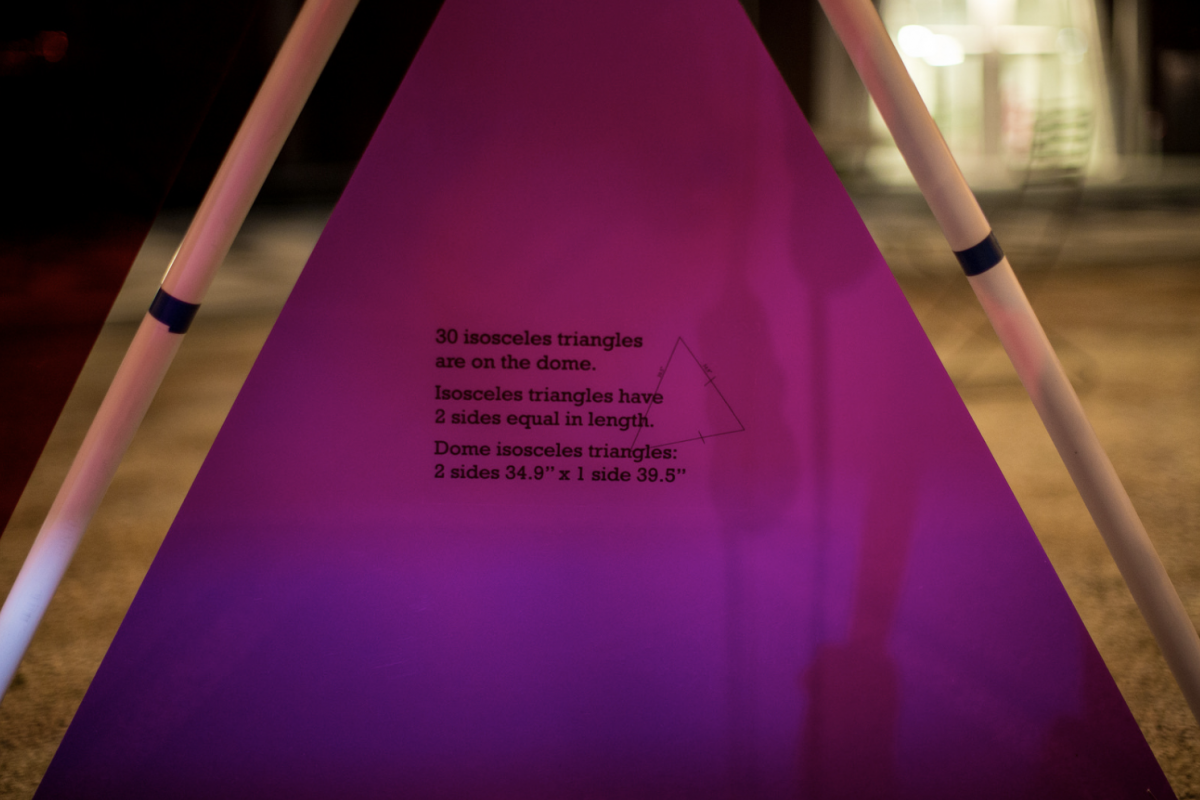 Nomadic Monument for Women in Robotics

The Nomadic Monument for Women in Robotics, designed by Diedra Krieger and Gaby Alfaro, celebrates the innovations of eight women pioneers in the field of robotics. Its goal is to create a community of women eagerly inviting aspiring pioneers to join them when entering the dome. The portraits and descriptions of women roboticists challenge stereotypes about who can be an engineer, allowing young girls to start developing a sense of belonging in an informal STEM learning environment. Joey Hartmann-Dow’s near life-sized portraits at eye level around the inside of the dome create a space that allows for a visual connection between the visitors and the roboticists. Visitors can read quotes of key moments or experiences that made them become pioneers in their field. Stereotype challenge, sense of belonging to a community, and having same-gender role models correlate with interest in engineering by women and girls. The Monument was sponsored by the Philadelphia Science Festival and The GRASP Lab.

Ruzena Bajcsy is Professor of Electrical Engineering and Computer Sciences at the University of California, Berkeley. She has received many prestigious awards for her contributions to the field of robotics such as membership of the National Academy of Engineering and National Academy of Medicine. Bajcsy was the founder of the GRASP Lab at the University of Pennsylvania in 1979 and awarded the Franklin Institute’s 2009 Benjamin Franklin Medal in Computer and Cognitive Science. She is a pioneering researcher in Active Perception methods, motivated by psychology, bringing together the fields of signal processing (sensing well through a lot of noise) and controls (using mathematical tools to develop formal sets of instructions – think a thermostat).

Lynne Parker is Professor of Computer Science, Associate Dean of the Tickle College of Engineering at the University of Tennessee, and founder of the Distributed Intelligence Laboratory. Her research is pioneering in the field of multi-robot cooperation– that is providing a group of robots a set of rules (algorithms) or data for problem solving tasks and letting them figure out what to do based on those rules and data.

Hadas Kress-Gazit, recipient of the National Science Foundation Career Award, is Associate Professor in the Mechanical and Aerospace Engineering Department at Cornell University. Kress-Gazit’s research focuses on robots that talk, controllers that are safe and predictable and complex and high-level tasks for robots (rather than one task done well).

Lydia Kravraki is the Noah Harding Professor of Computer Science and a professor at Rice University. She is well known for her innovative methods of path planning for robots and innovated the Probabilistic Roadmap Method (PRM). She has also used robotics-inspired methods for the development of new medicines.

Ayanna Howard is the Linda J. and Mark C. Smith Professor and Chair of the School of Interactive Computing in the College of Computing at Georgia Tech. Her research focuses on human-robot interaction, learning, and autonomous control for robots interacting in a human-driven world.

Daniela Rus is the Andrew (1956) and Erna Viterbi Professor of Electrical Engineering and Computer Science and Director of the Computer Science and Artificial Intelligence Laboratory (CSAIL) at MIT. She is well known for her work on autonomous self-reconfiguring robots (shape-shifting robots) that have the ability to adapt to different environments by altering their internal geometric structure.

Helen Greiner is the cofounder of iRobot and CTO of CyPhyWorks, a start-up, that specializes in small multi-rotor UAVs for commercial, consumer, and military use. In 2014, Greiner was named a Presidential Ambassador for Global Leadership (PAGE) by US President, Barack Obama and US Secretary of Commerce, Penny Pritzker.

Katherine Kuchenbecker is the Director and Scientific Member at the Max Planck Institute for Intelligent Systems in Stuttgart, Germany. Former Associate Professor of the GRASP Lab, Kuchenbecker is recognized for her advancements in Haptics technology, the mechanical capability to recreate the sense of touch.