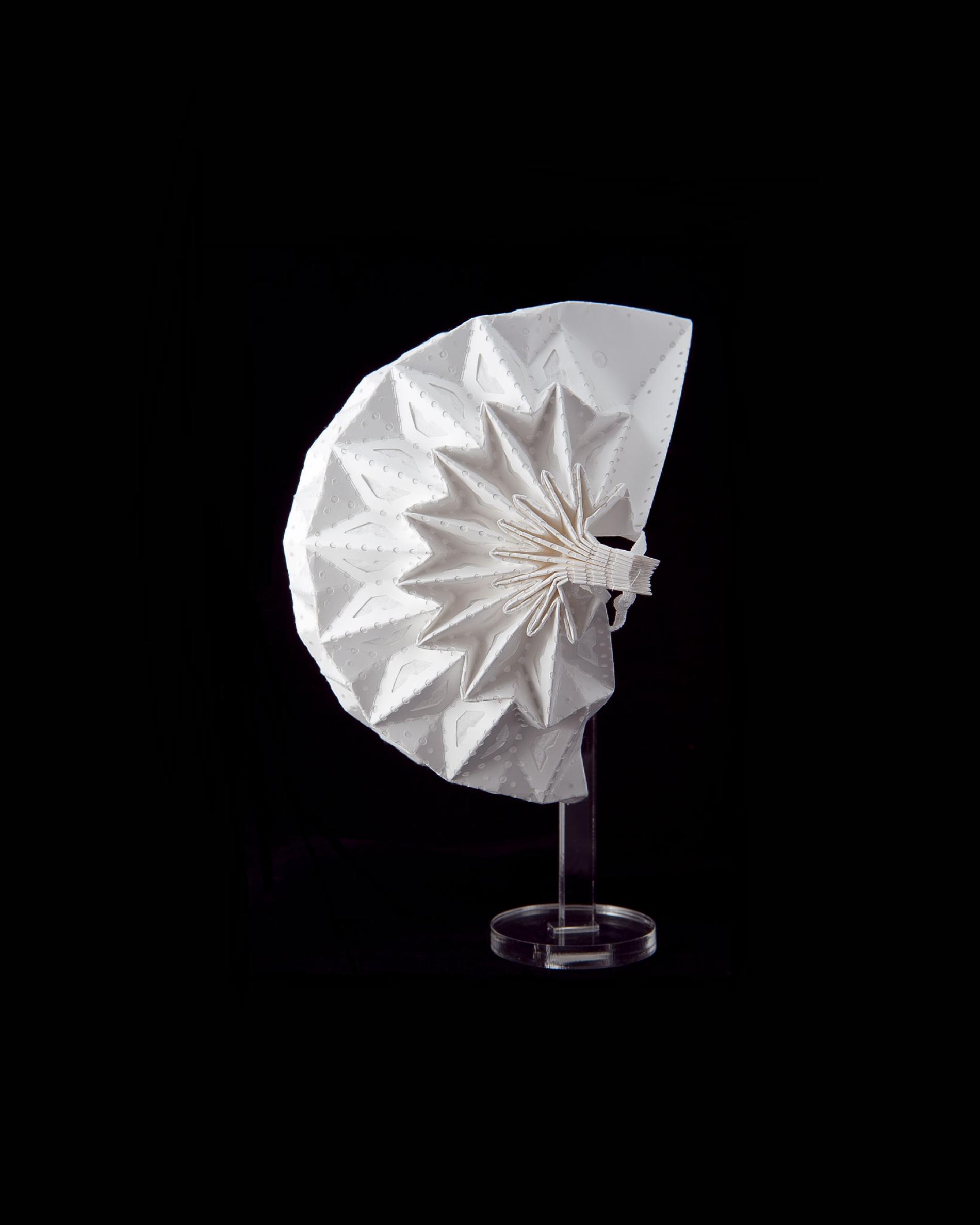 FOR RICHARD GORDON, origami is like a piece of music. While an individual fold may not be particularly impressive, many together can make the paper sing. A floppy sheet can transform into a flapping bird, a floating boat, a blooming flower, or in the case of Gordon’s latest endeavor, a face mask.

“It’s a kind of alchemy,” says Gordon, the founder and CEO of Air99 LLC.

Gordon is one of a growing number of mask designers who see the promise of better fit, function, and even fashion in the ancient art of origami. He began crafting masks more than a decade ago in Suzhou, China, when he couldn’t find a mask that properly fit his son to protect against air pollution. But the pandemic has given Gordon and other designers’ work fresh urgency.

As we wait our turn in the vaccination line, donning a mask is a critical measure—along with social distancing, ventilation, faster testing, and more—to help slow the spread of SARS-CoV-2. Newly inaugurated President Joe Biden is calling for all Americans to wear a mask during the first 100 days of his term, and he signed new executive orders requiring masks in federal buildings, on federal lands, and on many planes, trains, public ships, city busses, and in airports.

“We’re entering what may be the toughest and deadliest period of the virus,” Biden said during the inauguration. “We must set aside politics and finally face this pandemic as one nation.”

Masks may also become a mainstay after the pandemic to help keep both viruses and pollution at bay. While masking is already part of daily life in other countries, that hadn’t been the case for the United States. But a recent National Geographic and Morning Consult poll signaled a shifting attitude in the U.S. toward masking up. Some 63 percent of 2,200 American adults said they would continue to always or sometimes wear a mask while running errands post-pandemic. A similar number, around 64 percent, said they would turn to masks to fend off air pollution. And 67 percent said they would mask up during flu season.

Yet there’s a long list of mask complaints. Some flat coverings quickly turn into moist bits of cloth pressed across your face. Others can lead to a feeling of suffocation, even though cloth and medical masks allow plenty of oxygen through for healthy adults. And while all masks afford some level of viral protection, some are more effective than others. Origami holds promise to help alleviate many of these woes.

Material matters
The first major hurdle for origami mask designs is material. The mask isn’t a simple sieve. Instead, the material is more like a maze for particles—the more chances the particles have to run into a wall, the better the filter works. Two or three layers are better than one, and materials with less orderly structures, like the non-woven polypropylene of an N95 mask, make better filters. But most common fabrics are no good for origami, which requires rigidity in order to hold folds.

One potential solution is a polypropylene material commonly used in hospitals to wrap surgical instruments, explains Shu Yang, a professor of materials science and engineering at the University of Pennsylvania. She and her colleagues turned to this wrap during the early days of the pandemic when protective gear was running short.

A study of one common wrap called Halyard H300 suggested that three layers of the material could achieve a filter efficiency close to N95 masks, the gold standard for filtration, which block at least 95 percent of 0.3-micron particles and even increase in efficiency for both larger and smaller particulates. What’s more, the wrap is readily available in large sheets and is stiff enough to hold folds. Last spring, Yang and her colleagues delivered 10,000 origami masks made of the wrap to the University of Pennsylvania’s medical school in case of shortages.

Another solution for holding a crease is creating an outer skeleton of stiff material. Air99’s Airgami mask, for example, is made of a flexible N95-grade filter fused with a more rigid and foldable layer. Since the outer structure doesn’t allow air to pass through, it’s punched with holes so air can reach the filter layer. And tests suggest that these materials can be sanitized with heat and reused multiple times.

Other materials that are more readily available to the public can also be effective for some folded mask designs, says Jonathan Realmuto, a postdoctoral researcher at the University of California, Irvine. For example, non-fiberglass MERV-13 filters, which are commonly used for heating, ventilation, and air conditioning systems, are particularly effective and available at most hardware stores.

Figuring out the fit
Finding the right material is just the first step of crafting an effective mask. “It doesn’t matter how good the filter is if you don’t have a good fit,” says John Volckens of Colorado State University, who led an intensive testing effort to document the filtration efficiencies for an array of materials.

When improperly designed or worn, masks can have gaps around the nose or cheeks, allowing entry and exit points for potentially virus-laden particles to flow—and closing these gaps is where origami truly shines.

Origami techniques are already central to many masks on the market today, Volckens notes. 3M’s VFlex, for example, combines folding with heat welding to hold the material together, creating a more comfortable version of an N95. But N95s are not yet widely available, as U.S. supplies are still reeling from skyrocketed demand. The U.S. is the world’s largest importer of face masks—and continued failures of the federal government to scale up U.S. mask production have, in part, driven lingering shortages.

The dire need for more masks has inspired a variety of origami designs, from masks that anyone can make at home to designs that challenge everyone but the most expert of folders.

Features as simple as changing the angles of the pleats of common surgical masks can dramatically improve fit. This idea is at the heart of Jiangmei Wu’s folded mask design. Wu, an origami artist and associate professor of interior design at Indiana University, started experimenting with mask patterns after receiving a call from her brother in Hong Kong as the coronavirus started taking hold in January 2020.

“My goal was to find a design that was very simple and easy, and also fits very well,” she says. By rethinking the folds at the mask edges, Wu created three designs that each fit slightly different face profiles. She tested multiple options for mask material, landing on an outer mask layer of a type of non-woven polypropylene similar to those used in surgical masks but heavier and stiffer, which allows for folding. (Wu is still testing the mask’s filtration capacity and breathability.)

If you can make something aesthetically pleasing, people will feel more comfortable—and be more likely to wear it.
Other origami designs were developed as a way for people to create their own masks, even those who lack sewing skills. For example, a pattern developed by UC Irvine’s Realmuto and his colleagues was designed to be made in emergencies using readily available items. The folds, he says, limit leakage along the mask seams.

Gordon’s Airgami, however, is much more intricate. Interlocking paper valleys and mountains impart unique properties to the structure, he explains. Unlike a rubber band that narrows when stretched, the Airgami mask expands when pulled across the face, a feature of so-called auxetic materials. The result is a mask that stays flush to the face, even while the wearer is in motion.

“I can look down, I can talk while I’ve got it on, shake my head. It doesn’t want to come off,” Gordon says. (The Airgami passed independently conducted N95 fit and filtration tests, and the company is continuing to work toward full certification by the National Institute for Occupational Safety and Health.)

Some origami mask designs can also improve the wearer’s comfort. The folds give the mask structure and prevent the mouth from touching the material, eliminating the discomfort of a damp mask on the skin. Wu added rigidity to her latest design by heating a narrow line along the center of the mask, which melts the fabric into a vertical ridge.

The folds of the Airgami mask make it easier to breathe by dramatically increasing the amount of surface area for air to pass through. Unfolded, the filter is two to three times as large as common N95s.

“It’s like breathing through a straw versus a big pipe,” Gordon says of a mask with low surface area.

One unexpected benefit of the many folding patterns is stylistic flair, from the minimalist folds of Wu’s design to the mesmerizing fan of Gordon’s. Wu and Gordon also note that their mask materials could be printed in different colors and patterns. If you can make something aesthetically pleasing, people will feel more comfortable—and be more likely to wear it, Yang says.

A million a day
The more complex the design, however, the more challenging a mask is to make. “I think those sorts of innovations are wonderful,” Volckens says. But he adds, “until you’re making a million of those a day, you’re not making a dent in the problem.”

Even Wu’s simple pleated mask design has proven tricky to manufacture inexpensively, she says. She’s currently seeking ways to produce the masks in large quantities for less than a dollar each. “That’s the challenge of origami,” Wu says. “How do we take origami to mass production?”

Gordon and his team similarly are continuing to work on speeding up production. The masks are available for purchase at $33.99 apiece, but Gordon hopes to bring the cost down as the company improves manufacturing. While he has developed tools to assist with folding, the design’s complexity means that the Airgami still must be folded by hand. The time to make a mask is measured in minutes. “We have to get down to seconds,” Gordon says.

But mask designers are optimistic about the future of origami. Gordon likes to reference a 2008 TED talk by renowned origami artist and physicist Robert Lang. “As weird and surprising as it may sound,” Lang said, “origami may someday even save a life.”

“You can bet your bottom dollar that Robert was right,” Gordon adds.