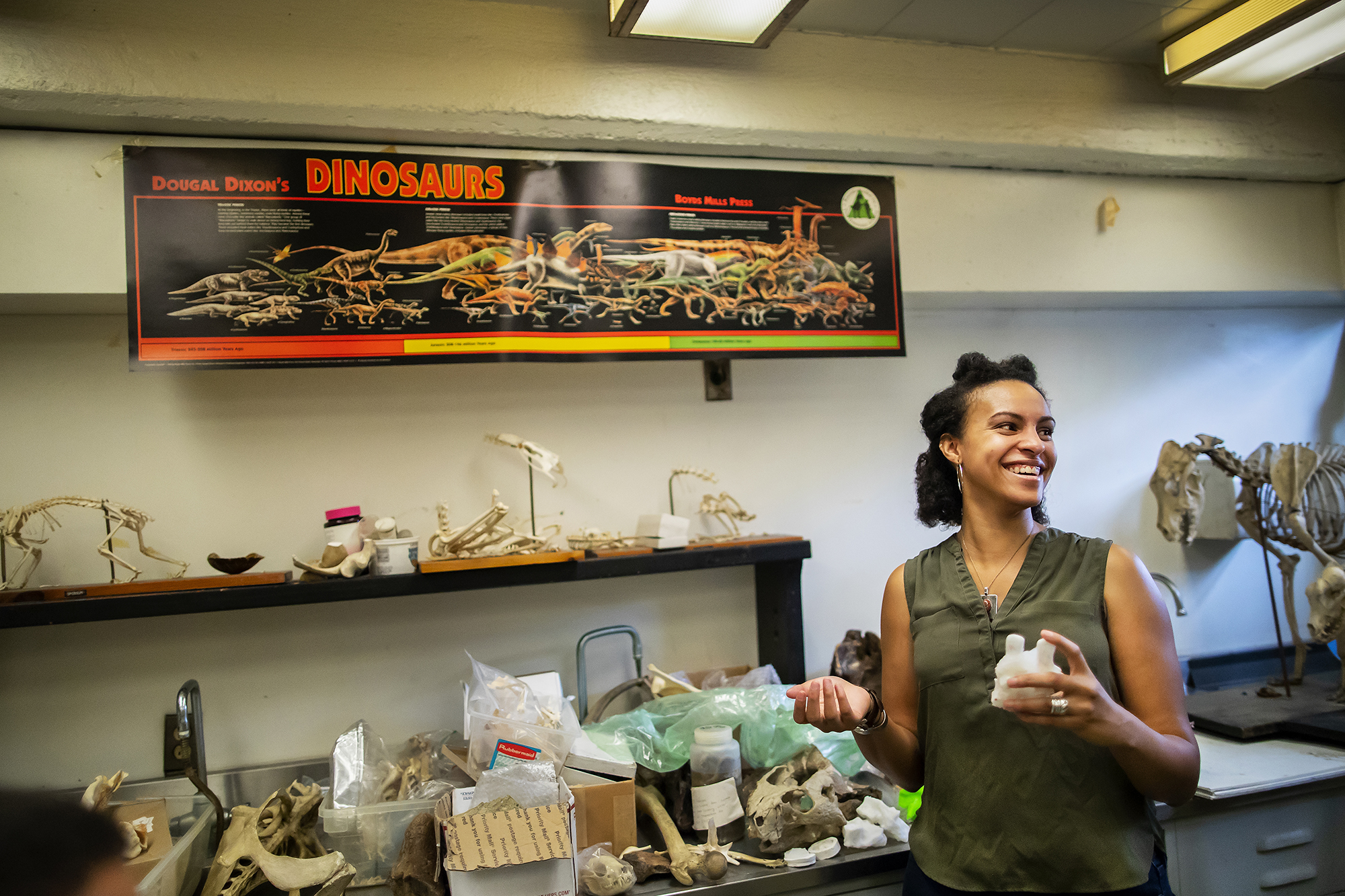 Vertebrate life began in the water, but around 340-360 million years ago, four-limbed creatures, or tetrapods, made the transition onto land. In the years that followed, some species adapted to terrestrial life, while others turned back to the water and readapted to an aquatic lifestyle.

A new study of these early amphibians, published in the journal PLOS ONE and led by Penn paleontologist Aja Carter, suggests that these environmental shifts left an impression—on the shape of the animals’ spines.

“I’m interested in how the shapes of the vertebrae affect how animals move,” she says. “Our findings suggest that, in at least one part of the vertebrae, the shape of the bones correlated with the environment in which the animals were living.” Those associations, Carter says, may be a result of the different physical demands of living on land versus in the water.

Diversity, now and then
Many characteristics distinguish creatures as diverse as humans, dogs, snakes, and even Stegasaurus, but one thing that unites them is the basic shape of their vertebrae.

“They all have this hockey puck-shaped thing, the centrum, fused to these sticky-outy parts, the neural arch, the transverse processes,” says Carter, a paleontologist who earned her doctoral degree from Penn’s Department of Earth and Environmental Science in the School of Arts & Sciences and is now a postdoctoral fellow in the School of Engineering and Applied Science. “But that’s not always how it’s been.”

Go back further in evolutionary time, Carter says, starting even before dinosaurs arose, and one will find a highly diverse set of vertebral shapes. Yet it’s not clear why all this diversity was present, or why vertebrates today have landed on one basic vertebral structure almost without exception.

The researchers used a technique known as geometric morphometrics to analyze the vertebral shapes. (Image: Courtesy of Aja Carter)
Scientists have long debated whether a particular vertebral shape was important for these animals to colonize land or subsequently recolonize water. To explore the question, Carter focused on early amphibians, a group known as temnospondyls, which were the most diverse tetrapods living in the Carboniferous through the late Permian, or about 360 to 250 million years ago. Some lived exclusively on land, some exclusively in water, and some were amphibious. In addition, some that were known to be terrestrial had evolved from ancestors that were aquatic, and vice versa.

“If we want to understand macro-evolutionary trends, we need a lot of specimens,” Carter says. “There are about 290 species of temnospondyls, and they come in different sizes, and we know a lot about them. So this was a great group to focus on.”