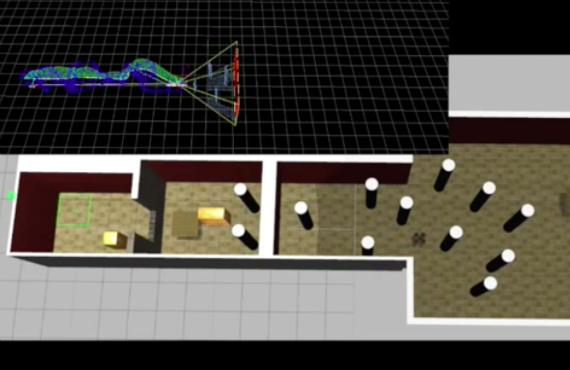 The University of Pennsylvania’s GRASP Laboratory has received a three-year, $5.5 million grant from the Defense Advanced Research Project Agency to create new flying robots that are able to quickly and autonomously navigate unknown environments. These abilities would be invaluable in disaster situations where conditions are too dangerous for humans to inspect damage or search for trapped or injured people.

“Our emphasis is on three S’s: size, speed and smarts,” said Vijay Kumar, the Nemirovsky Family Dean of Penn’s School of Engineering and Applied Science. “A small, fast flying robot that can find its way through a partially collapsed building or a nuclear plant during a meltdown has the power to save lives.”

DARPA’s Fast Lightweight Autonomy, or FLA, program seeks unmanned aerial vehicles that weigh less than three kilograms and can fly at speeds as fast as 65 feet per second.

Such robots are already a common sight in the GRASP Lab at Penn Engineering, where swarms of palm-sized quadrotors fly in tight formations and zip around obstacles. However, those feats are accomplished with the aid of motion-tracking cameras mounted on the walls of the lab, which relay precise location information to a central computer and back to each robot in the swarm.

Enabling each robot to see and recognize features of a given environment, such as walls, doors, windows, and people is the first step toward autonomous navigation. Each robot must also be able to make sense of this information and plan its trajectory accordingly. Packing all of these abilities onto a fast, lightweight platform requires drawing on several engineering disciplines.

In addition to Kumar, the principal investigator for the FLA program, GRASP Lab director Daniel Lee, and members Camillo J. Taylor, Kostas Daniilidis and Jianbo Shi, along with their students, will provide necessary expertise for the project. Lee, who also leads Penn’s team in the DARPA Robotics Challenge and in the international robotic soccer competition RoboCup, is an expert in machine learning and autonomy. Taylor will provide insights into computer vision and object recognition, while Daniilidis will provide his expertise on 3-D vision for navigation in unknown environments, and Shi will work on machine learning as it pertains to 3-D perception.

The DARPA grant will extend existing work on miniaturizing quadrotors that can fly autonomously in never-before-seen environments. Using a suite of on-board sensors and processors, such robots can enter a building, make three-dimensional maps of the space and use those maps to return to their starting point.

Lab members have already built a flying robot that can do aspects of this kind of navigation using the software and cameras on a customized platform but at more modest speeds.