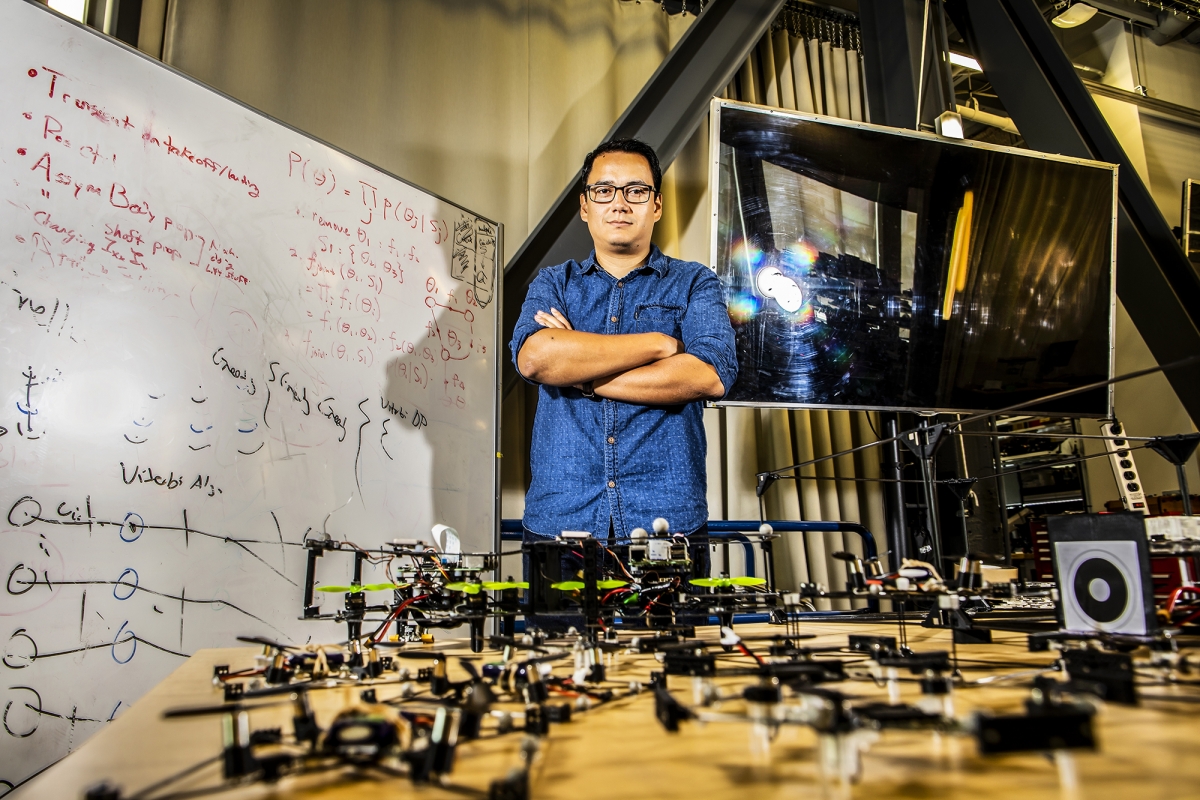 In the Penn Engineering Research and Collaboration Hub, there is a wide-open space with high ceilings and a padded floor. All around it are aisles of soldering equipment, propped-up prototypes, and metal parts of many shapes and sizes. Nestled on the third floor of the looming Pennovation Center building in the Grays Ferry neighborhood, it’s the perfect venue for robotics research.
This is where Saldaña, a member of the General Robotics, Automation, Sensing & Perception (GRASP) Laboratory, and his collaborators in the School of Engineering and Applied Science perform test flights with some of his robots. Although the designs vary in size, the newest square prototype is about the size of a shoebox. Each can be remote controlled like most drones, but when he activates several of them at once, they autonomously come together in the air.
From a remote computer, Saldaña can send a command to eight robots simultaneously to perform a certain task such as getting into a formation of four across, two wide. The robots rise, communicate with each other to determine their spots in the two rows, align, and snap together using the magnets on their corners. When he tells them to disassemble, one coupling at a time, they break apart by angling down in opposite directions similar to a pencil being snapped in half.
If you ask Saldaña, there are a lot of problems that can be solved by robots. With a little more honing, robots like this could have major real-world applications. Saldaña uses the example of a remote area where a bridge has collapsed, leaving people stranded during a natural disaster. These robots, which are small and easy to transport, could self-assemble and hover where the bridge used to stand, providing a pathway for stranded people to safely cross.
One of the reasons this isn’t already common practice is because autonomous control of robots is a hard task in obstacle-filled environments like the outdoors. Operating hundreds of them in those situations is no small challenge.
“Autonomous control of a single robot is difficult,” he says. “Somebody’s going to hit the robot. It has to avoid obstacles. Simple tasks, like moving from point A to point B, can be very complicated if you do it in a forest. So that’s for a single robot, but now when you have 100 robots, the things become even more complicated. The problem is even harder. And that’s what we tried to solve here.”
Another part of the challenge is making sure the robots are communicating sufficiently with each other. Because they don’t have predetermined positions for a given formation, they must figure out which unit can go in each spot based on current position. Then, once together, they must move smoothly as a single unit.
“It’s like when you walk with someone, and you are holding on to the other person. It’s not that easy to walk,” Saldaña says. “That’s the same with these robots. Now one robot is holding the other, and if they don’t coordinate, they crash.”
Looking to the future, Saldaña says another application could be for package delivery. Delivery drones grasp objects with a mechanical claw-like mechanism, but with the way Saldaña’s robots work, the robots can both grasp and lift the object by forming a shell around it and rising upwards.
Saldaña shows how four of these robots fly down to a coffee cup on the floor and arrange themselves in a diamond pattern around it, touching each other only at their magnetized edges. When they are formed closely enough that the lip of the coffee cup extends just over the top of them, they gently rise, lifting the coffee cup and transporting it to a preprogrammed destination.
“We can also transport soda, beers, depending on what you want,” Saldaña jokes. Right now, the prototypes haven’t yet moved beyond lifting small beverage cups. But as their designs are continually refined, there is potential for lifting even bigger objects.
With a number of scientific publications under his belt, including his most recent work published in Robotics and Automation Letters, Saldaña emphasizes the collaborative nature of his project, with support from his advisors Vijay Kumar and Mark Yim, along with the ModLab and the many graduate students he’s worked with during his two years at Penn.
“David’s work is a great example of what the GRASP Lab and Penn Engineering is all about,” says Kumar, the dean of Penn Engineering. “When you bring people with lots of different ideas and skills together, that’s where real innovation occurs.”
In his time as a post-doctoral researcher, Saldaña has made the flying robots smaller and more efficient through several iterations. This fall, as he leaves to accept a position at Lehigh University, he hopes to continue to collaborate with GRASP, now as an alumni.
Vijay Kumar is the Nemirovsky Family Dean of the School of Engineering and Applied Science and professor in the departments of Mechanical Engineering and Applied Mechanics, Computer and Information Science, and Electrical and Systems Engineering at the University of Pennsylvania.
Mark Yim is professor and director of integrated product design in the Department of Mechanical Engineering and Applied Mechanics in the School of Engineering and Applied Science at the University of Pennsylvania. He was also recently named director of the GRASP Lab.
Read the full article published by Penn Today.