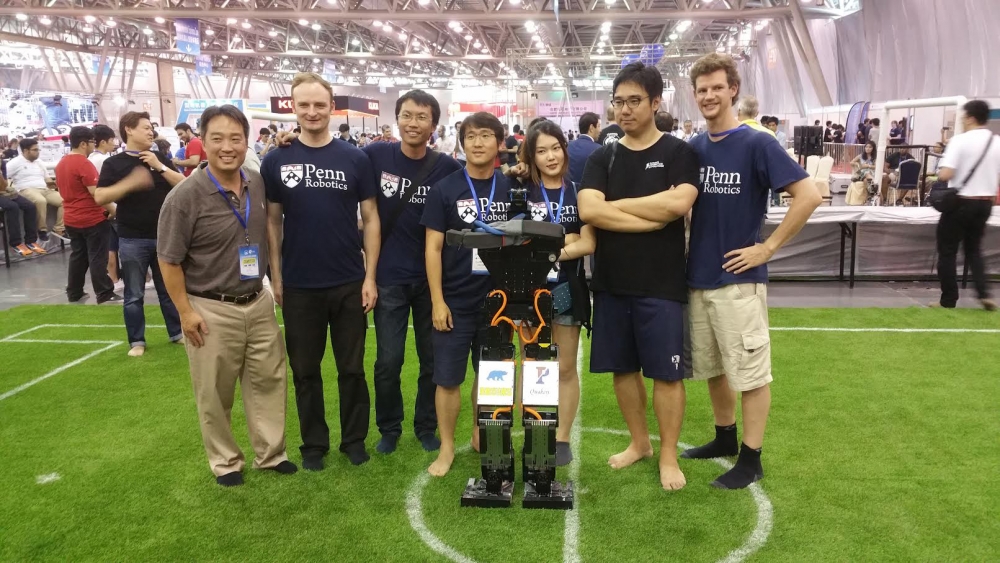 By Sydney Schaedel ・ 11 hours ago

Every July, Penn dominates in a soccer world championship. But it’s not the students on the field.

This summer, Penn’s robots beat out Iran in the RoboCup World Finals.

“You have robots playing against each other in a game of soccer, and all the robots are supposed to be autonomous, so that means that they behave by themselves based on the algorithms you programmed,” doctoral student and Penn RoboCup team captain Stephen McGill said.

Penn’s RoboCup team is composed of two different groups. Undergraduate students generally compete in the standard platform league, which uses smaller robots that are only a few feet tall and standardized hardware for each team in the competition.

Graduate students compete using adult-sized humanoid robots, which teams build themselves. There are also differences between the two leagues in how the robots play against each other.

“You want to coordinate three or more of these robots on a field for the standard platform league. For the adult-sized humanoid league it’s a one-on-one scenario, like a penalty shot in hockey,” McGill said.

It was Penn’s humanoid league that ultimately swept the competition this year, winning its last game in overtime.

“We were able to defeat Iran in the nick of time,” McGill said.

Some of the same students have been involved with RoboCup and working on fine-tuning the robots’ algorithms for years. The longevity of the project has paid off. Penn has been incredibly successful over the years, winning its fifth trophy in a row at this year’s competition.

McGill attributed the Penn team’s success to “a lot of hard work.” He also credited faculty sponsor professor Daniel Lee for keeping the team on the right path.

“He really makes sure that we’re staying focused and looking at the right aspects of the code,” McGill said.

The challenge factor of the competition also increases every year, making it hard to stay consistently competitive.

“This year in particular, the vision changed a lot because … everything was white, except the robots, the field and the obstacles. And the turf was just like astroturf,” McGill said.

Even the logistics of traveling to this year’s Robocup were more challenging than usual, because it was held in Hefei, China.

“We had to fly all of our equipment over, and deal with all the headaches of shipping,” McGill said. “Once we got over there we set up shop and did our best to reprogram the robots, to fix any bugs.”

Engineering junior and fellow team member Sagar Poudel explained in an email that the competition is not all about soccer.